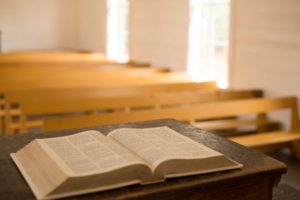 Recently I was engaged in a conversation with someone who was adamant about the current trend in our country to not only disagree with our national leaders but to defiantly oppose them by any means necessary.

While listening to their opinion, I wondered how they would respond to the counsel of the Bible on the subject of how to handle our governing authorities.

I find it interesting that God took the time to deal with how we are to interact with those governing over us.  I can imagine it was most important during the time of Jesus in Jerusalem, because of the turmoil of the Jewish people living under the rule of the Roman Empire.

While the Jewish people wanted to be free of the oppression of Rome, their ideas of how that would happen was radically different from what the new young Jewish leader of the emerging movement that would take over the world was teaching.

Consider what the Bible says about our response and attitude to those who govern over us and compare it to what is currently in the American culture:

Romans 13 vs 1-7  Submit to Government
13″ Let every soul be subject to the governing authorities. For there is no authority except God, and the authorities that exist are appointed by God.

2 Therefore whoever resists the authority resists the ordinance of God, and those who resist will bring judgment on themselves.

3 For rulers are not a terror to good works, but to evil. Do you want to be unafraid of the authority? Do what is good, and you will have praise from the same.

5 Therefore you must be subject, not only because of wrath but also for conscience’ sake.

6 For because of this you also pay taxes, for they are God’s ministers attending continually to this very thing.

7 Render therefore to all their due: taxes to whom taxes are due, customs to whom customs, fear to whom fear, honor to whom honor.”

Some may think that blind obedience when a questionable governing power is causing chaos, is the cowardly thing to do.  This does not mean that you cannot take an active role in silently engaging on behalf of the governing authorities.  Praying for our leadership to have the wisdom to lead and to submit to Godly principles for leadership is a very active sign of engaging.  It not only petitions the leadership before God, but it also allows the submission of your heart to God so that you are not buffeted by the emotions that will come when you see leadership acting contrary to Godly principles.  You will be able to rest in knowing that all leadership has to answer to God, because by his authority alone are they established.  Romans 13 verse 1

When I referenced this teaching and attitude about submission to government and obedience thereof to the person I was speaking with, they immediately were highly offended by the notion of obedience.

Admittedly obedience does not come naturally to us.  Just ask any mom or dad.

Furthermore, when it comes to obedience, all I have to say about that is, it was disobedience that got this whole world messed up in the first place.  If disobedience to God is what got our country and the entire world in the bad state we now find ourselves, why do we think that continued disobedience will correct it?

First, it was disobedience by Lucifer in his disobedience to God which led to his heart being changed to the point that he felt the need to rise up against God.  Does that now sound like what we are seeing in the news lately with the attitude of rising up, protesting and the call for the ouster of our current leaders?

In my conversation, this person was most highly offended as a result of their education and intellect, and they indicated that we Christians should  “think for ourselves and not allow brainwashing to guide us into  inaction.”

I can most certainly sympathize with their point of view, however, there are larger implications regarding our obedience or disobedience.  Consider the following:

There was disobedience by Adam and Eve who were so “intelligent” so “educated” and were duped into thinking they were wiser than God, by the cunning deceiver, Satan.  We can clearly see to this day that their disobedience did not work out in their favor, and their disobedience has long-lasting consequences for every generation and human to come after them.

Thinking for themselves without wisdom was a major mistake as it is today with our culture and society.

Consider these examples:  Noah, Abraham, Moses, Paul, and Jesus Christ.  Without the obedience of these key figures in history, well there would be no history.  Consider the long-lasting impact of their obedience to God’s principles and his direct orders.

So while it may be natural for us to look at the world with human eyes and feel the need to disobey for the sake of advocating our own agenda, the example of Jesus shows a level of obedience that has far-reaching benefits that will not only benefit you as the individual, but countless lives of those around you and those to come after you.

Is it always easy?  Absolutely not, because of our natural tendencies toward disobedience.  But slowly if you can understand that God has put in place areas of obedience into our lives for our growth, benefit, and protection, then you will begin to see that truly his way is best.

Currently, we have God’s word as the cornerstone of our obedience.  It will be the measuring stick of our spiritual growth in this life, and the absolute authority of our judgment in the next.

Just imagine if we could have added both Adam and Eve to the list of obedient warriors!  What about you and I?  Shall we perhaps incline our ways toward obedience so as not to inherit the negative consequences that we have seen duplicated in the lives of others?